skip to main | skip to sidebar

Do you have an Advent Calendar? If so, I'd love to see pictures.

I found this and I think I may try it. I've got plenty of time to get it done before Christmas...I think. I'm so ready to start sewing again but have to get the house in order first. I've got a growing list of things I want to work on...I'll save that for another post.

Have a Happy New Year!
Posted by Stephanie @ My Answered Prayer at 10:00 AM 3 comments:

I hope I'm not alone when I say this but I really feel like Christians are being attacked. I thought we were supposed to be a FREE Country where we could speak what we believe. Apparently not! I have been appalled by all the news this CHRISTMAS season about the attacks that people are making on CHRISTMAS. It doesn't just have to do with Manger scenes, etc it is now to Christmas lights and buttons.

I heard one news segment about a lady that got fired b/c she was wearing a pin that a customer gave her that said "It's called Christmas for Christ's sake...click here to see the video from FoxNews.

It just all makes me sad. I believe that Jesus Christ was born the son of God and was placed on the earth in order to pay for our sins. Through his death and resurrection we can be made new and live eternally with him in Heaven. I know that's not what everyone believes and I respect that but I feel like Christians should also be respected for what they believe.

Sorry but I just needed to vent....
Posted by Stephanie @ My Answered Prayer at 6:35 PM 2 comments:

I bought the new Point of Grace Christmas CD over Thanksgiving. Even though I don't think it's as good as the first Chrstmas CD, I'm growing to love it. I have been a huge POG fan since the mid 90's and love how they incoporate stories into some of their songs.

The other day on my way to the big town to do some shopping I had my CD in. I had to reverse it several times to be able to hear the whole song and the whole story. Emmanuel, God With Us is the song I'm referring too. Real the lyrics below, enjoy and don't get too teary eyed.

Point Of Grace
Emmanuel, God With Us

She lit a candle in a downtown cathedral
Quietly confessing, counting all her blessings
She looked as if she had nowhere to go
I could see her weeping
Hands together hoping you would hear...

So with my family that Christmas day
A girl of sixty years would laugh and play
And as we watched her dance our eyes were full of tears...
Posted by Stephanie @ My Answered Prayer at 5:37 PM 3 comments: 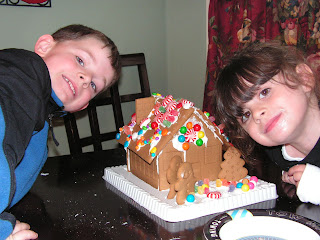 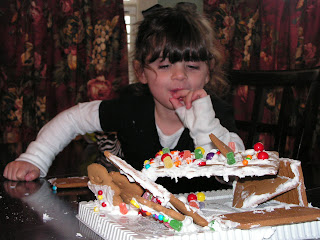 Sunday after church we came home and made gingerbread houses. Before you think that I'm super mom just know that these are store bought kits from Walmart. If you haven't tried doing this with a 3 yr old and 6 yr old you should try it. L did great with his....it actually stayed together. I can't say the same for A's. It ended up in a heap of cookie and candy. All she wanted to do was lick the icing anyway. This will probably become one of our traditions...yes we like messy!!
Posted by Stephanie @ My Answered Prayer at 8:49 PM 4 comments: 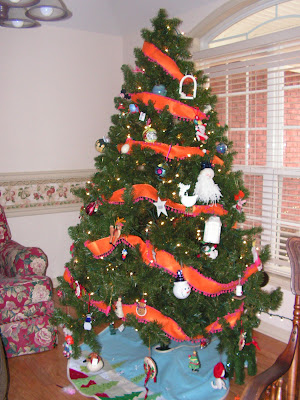 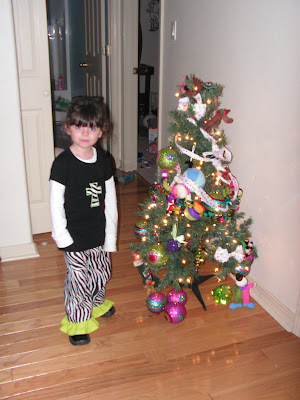 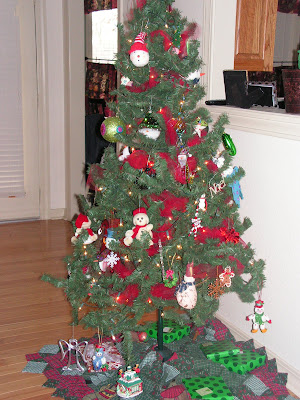 In the past we have always had only one Christmas Tree that was full of a hodge podge of ornamanets that we have received or bought since we've been married (10 yrs now). I also inherited all of my grandmothers handmade ornaments since I was the only granddaughter. She made them out of felt and sequins. They were mostly disney characters so my kids love them.

Last year we added a tree for the kids to decorate and yes you can definitely tell they decorated it. They love it!!!


Well this year we are hosting a big family Christmas at our house and when we found an extra Christmas tree in our attic my husband said let's put it up. It was left over from our multi family yard sale we had back in the fall so I called up my friend Amber and asked her if there was anything wrong with it. There was nothing wrong just a little sparse....nothing a little bit of tulle couldn't fix. So this was supposed to be my snowman tree but the kids have added things so it's becoming a hodge podge also.

I love my trees...they are cute, not pretty like my friends Lisa and Aaron. Mine are more sentimental like my friend Amber's. It's fun to see how everyone's personalities come out in their trees. Have a MERRY Christmas!!!!
Posted by Stephanie @ My Answered Prayer at 4:10 PM 4 comments:

The things I've done are in bold. My comments are in red

1. Started your own blog
2. Slept under the stars does camping a tent or camper count?
3. Played in a band
4. Visited Hawaii
5. Watched a meteor shower
6. Given more than you can afford to charity
7. Been to Disneyland/world
8. Climbed a mountain
9. Held a praying mantis
10. Sang a solo
11. Bungee jumped
12. Visited Paris
13. Watched a lightning storm at sea (from the beach)
14. Taught yourself an art from scratch
15. Adopted a child
16. Had food poisoning
17. Walked to the top of the Statue of Liberty
18. Grown your own vegetables tried and failed
19. Seen the Mona Lisa in France
20. Slept on an overnight train
21. Had a pillow fight
22. Hitch hiked
23. Taken a sick day when you’re not ill wanted to but never did...guilty conscience
24. Built a snow fort
25. Held a lamb
26. Gone skinny dipping
27. Run a Marathon
28. Ridden in a gondola in Venice
29. Seen a total eclipse I think I have
30. Watched a sunrise or sunset
31. Hit a home run maybe? I hit a home run at a yard sale this week :)
32. Been on a cruise
33. Seen Niagara Falls in person
34. Visited the birthplace of your ancestors
35. Seen an Amish community
36. Taught yourself a new language
37. Had enough money to be truly satisfied
38. Seen the Leaning Tower of Pisa in person
39. Gone rock climbing
40. Seen Michelangelo’s David
41. Sung karaoke back in the college days
42. Seen Old Faithful geyser erupt
43. Bought a stranger a meal at a restaurant
44. Visited Africa
45. Walked on a beach by moonlight
46. Been transported in an ambulance
47. Had your portrait painted
48. Gone deep sea fishing
49. Seen the Sistine Chapel in person
50. Been to the top of the Eiffel Tower in Paris
51. Gone scuba diving or snorkeling
52. Kissed in the rain probably
53. Played in the mud mudding on the 4 wheeler was always fun!
54. Gone to a drive-in theater
55. Been in a movie
56. Visited the Great Wall of China
57. Started a business Addie Mae's Closet
58. Taken a martial arts class
59. Visited Russia
60. Served at a soup kitchen
61. Sold Girl Scout Cookies
62. Gone whale watching
63. Got flowers for no reason
64. Donated blood, platelets or plasma
65. Gone sky diving
66. Visited a Nazi Concentration Camp
67. Bounced a check buying an anniversary card for my parents when I was in college...balanced my checkbook wrong. The check was all of $2.13...that was one expense anniversary card.
68. Flown in a helicopter
69. Saved a favorite childhood toy Cabbage patch kids
70. Visited the Lincoln Memorial
71. Eaten Caviar
72. Pieced a quilt Joined the Quilter's Guild to learn how
73. Stood in Times Square
74. Toured the Everglades
75. Been fired from a job
76. Seen the Changing of the Guards in London
77. Broken a bone
78. Been on a speeding motorcycle
79. Seen the Grand Canyon in person
80. Published a book
81. Visited the Vatican
82. Bought a brand new car even bought one without my husband using his POA
83. Walked in Jerusalem
84. Had your picture in the newspaper too many times to count unfortunately...the effects of living in a small town.
85. Read the entire Bible made it through the New Testament...the Old is just tough to get through.
86. Visited the White House
87. Killed and prepared an animal for eating
88. Had chickenpox Jr year of HS
89. Saved someone’s life
90. Sat on a jury
91. Met someone famous maybe but didn't make that big of impression to remember...that really doesn't do anything for me.
92. Joined a book club
93. Lost a loved one
94. Had a baby two
95. Seen the Alamo in person
96. Swam in the Great Salt Lake
97. Been involved in a law suit
98. Owned a cell phone
99. Been stung by a bee

Thanks, Stephanie. Anyone else want to play along? Be sure to let me know in the comments.

Posted by Stephanie @ My Answered Prayer at 8:45 PM 4 comments:

Stephanie @ My Answered Prayer
I'm a stay-at-home mom to 2 wonderful children and thank God everyday for the life he has given me. I have a wonderful husband who is being very supportive in our decision for me to stay home.